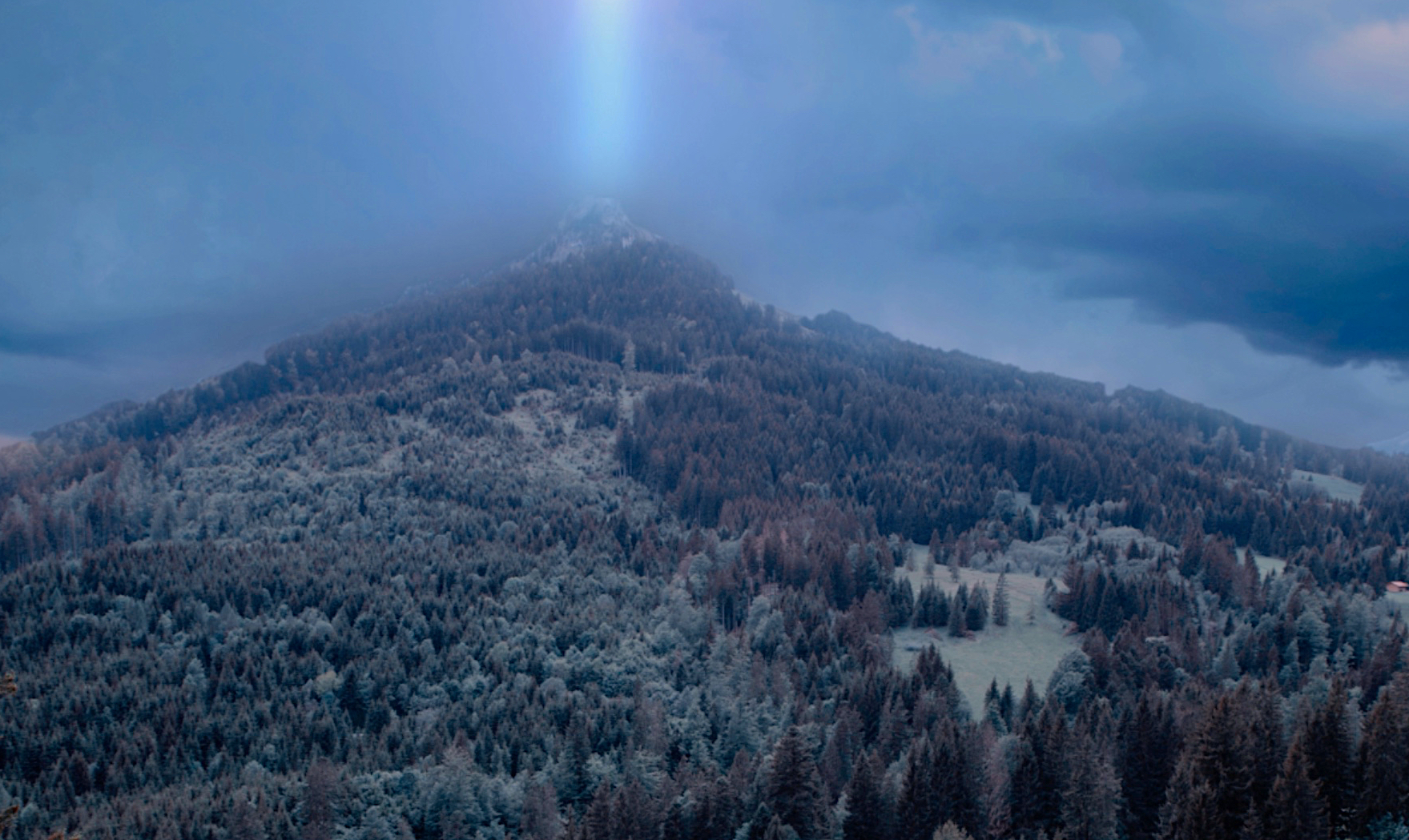 Unexplained phenomena are very often associated with certain places and areas. Some areas have been labeled triangles. The most prominent historical triangle is the Bermuda triangle. Today, the Alaska triangle and the Bennington triangle are well known. Nearly any famous spiritual place is connected with an energy vortex. They are often supposed to be portals to another dimension. But what are they?

A number of energy vortexes have become very popular tourist destinations. These places are mostly mountains and forests. Some of them have visitor centers and offer useful information and guidance, for example, the Montana Vortex. In the U.S. these places have been already spiritual places or even center of the spiritual world of the American Indians. Mount Shasta is an example.

Later, the esoteric movement discovered these areas, and they are often seen as healing places and places for inner development or spiritual insight. They have the same qualities as places of pilgrimage in Europe. Two prominent energy vortexes, Mount Shasta in Northern California and Sedona in Arizona, are huge territories with high mountains. However many attributes of the place are the same as of the Tor in Glastonbury or Stonehenge. Thus, the size of an area is not the most important element here.

Mostly, energy vortex places are seen more or less as a positive thing whereas triangles are sinister and scary areas. However there are also many missing person cases for example in the Mount Shasta area, a well-known vortex, and there are warnings about the portals at Sedona. It seems that any place of power has always a positive and a negative side. This dangerous side should not be underestimated.

David Paulides quotes the warnings in a letter of a Native American woman in a video of his CanamMissing Project Youtube Channel. The woman says that Mount Shasta is an incredibly dangerous place “thick with the spiritual world”. Visitors should not go beyond the treeline. David Paulides accomplishes what she says. It is a fact that the Cascade Mountains including Mount Shasta are a place of many mysterious vanishings

So, white people understand these places and areas in a “technical sense”. But, why vortexes? Has anybody seen vortexes of energy there, some sort of spiral, tunnel, wormhole? It seems more a kind of classification.

There are a couple of possible explanations: A vortex was indeed seen by witnesses in the Bermuda triangle. The Bermuda triangle is in a way the mother of all these zones of the paranormal. It is possible that the reports about the Bermuda triangle worked as a set-up. Then there are scientific investigations claiming vortexes are electromagnetic whirlwinds.  There is also a serious claim about gravitational anomalies. These anomalies actually exist: Gravitation is not exactly the same in different places on Earth. There is also physical evidence for anomalies. An interesting phenomenon is the unnatural growth of plants. Examples are found in the Montana vortex.

But there is another explanation: A vortex is a similar shape like a spiral which is a powerful archetype. We find these shapes in cathedrals, mazes, architecture, art, in nature, and in space. It’s something people know through all times. In a way, the vortex is also a symbol for the otherworld.

Fiction and science fiction helped to build an imaginary with wormholes and dimensional rifts.  The vortex has become a common element in culture.  This works both ways: Writers take inspiration by paranormal phenomena, folklore, and witness reports. Vice versa our perception and interpretation of our experience are influenced by what we read and see on TV.

Where are these vortexes and triangles?

There is no official list of vortexes and triangles. A lot of maps and lists of places appear on the web. It depends on the writer what he thinks what a vortex is. Famous triangles are the Bennington triangle in the Northeast of the U.S. and the Alaska triangle. Another area is the “The Devil’s Triangle or “The Devil’s Sea near Japan.

The most prominent energy vortexes are the Sedona Vortex, Mount Shasta, or the Montana Vortex. The Sedona vortexes are actually seen as a group of vortexes, which could be found at Cathedral Rock, Boynton Rock, and Bell rock. Other vortexes are Haleakala National Park in Hawaii, Taos in New Mexico, Crater Lake in Oregon, Ojai in California, Monument Valley in Arizona-Utah, and Mount Mitchell. Furthermore, most sacred sites are considered vortexes as the Great Pyramid in Egypt, Stonehenge, or Ayers Rock in Australia. Again: There is no official list or official definition about a vortex.

The most common understanding of a vortex is perhaps a sort of a „node“, a place on Earth where energy enters the planet or is emitted. But a crucial part is also the idea that it is a sort of door between different dimensions.

What does an energy vortex do to reality?

The most interesting aspect of an area with a vortex is the obvious ability to shift our common reality into a different kind of reality. All kinds of apparitions are reported. People are getting disorientated and getting lost. Others experience positive sensations. Some people have kind of a healing experience. Impossible things seem to happen. If we believe the many reports, which tell us about such experiences there is another question: Why is there no deeper impact in our normal world? Shouldn’t these experiences have changed the scientific world-view? The answer may be the nature of these zones: Our ordinary logic doesn’t have a place here. Normal explanations are not working. To understand the vortex we have to think differently.

Are there examples of reality shifts?

Surviving witnesses of accidents in the Bermuda triangles reported anomalies as a luminous haze on a clear day or failures of electromagnetic instruments or spinning compasses. An airplane crew experiences a loss of time and disappeared for 10 minutes from the radar. Some believe that many creatures or aliens, which occur in energy vortex areas are time-travelers.

There is another phenomenon, which is sometimes connected with the idea of energy vortexes: These are the strange cases of persons who shifted into another dimension. There is also the idea that an “energy body” can be created in another dimension. This idea is not new and appears already in Shamanic wisdom.

Then there are, of course, the missing411 cases, which include many strange circumstances. They are the best evidence we have that there are indeed phenomena, which aren’t understood by science so far.

We do know that there are a lot of things going on around us in the mountains, in the fields, in the forest. Areas of the unknown can be described as vortexes or triangles. What we don’t know is what is exactly the reason or explanation for many incidents and strange events. We have to decide on our own what we want to believe or not want to believe.

However, the idea of parallel worlds has become more and more accepted as a reality in the last years. Even we might not understand how this world of higher dimension works and why some people are traveling between realities we have a strong premise, which gives many witnesses reports credibility.

According to these reports, there are many cases where an alternate reality stepped into ours.  These cases include reality glitches as a person suddenly finds itself in a different place or bilocation. Brent Swancer mentions also a man who discovered himself in an old photo of the Grand Canyon at a time where we definitely weren’t there – sounds a bit like the last image of “The Shining” with Jack in the middle of the Black and White picture.

Typical cases include persons who find themselves in a place and have no idea how they got there (this is also typical for many missing411 cases). We hear often about places, which doesn’t really exist in our plane of reality: Typically a traveler stops at a rest stop, a restaurant or a house and later he cannot find that place again. Locals deny that these places exist. This is a good example of the possibility that another dimension overlaps sometimes with our plane of reality. What if you get lost in that interplay of layers of different planes of reality?

Another interesting question is if these events can occur anywhere why are there special places like vortexes or triangles? An answer might be that they are kind of hotspots. There are often clusters in certain areas, but strange things can happen anywhere.