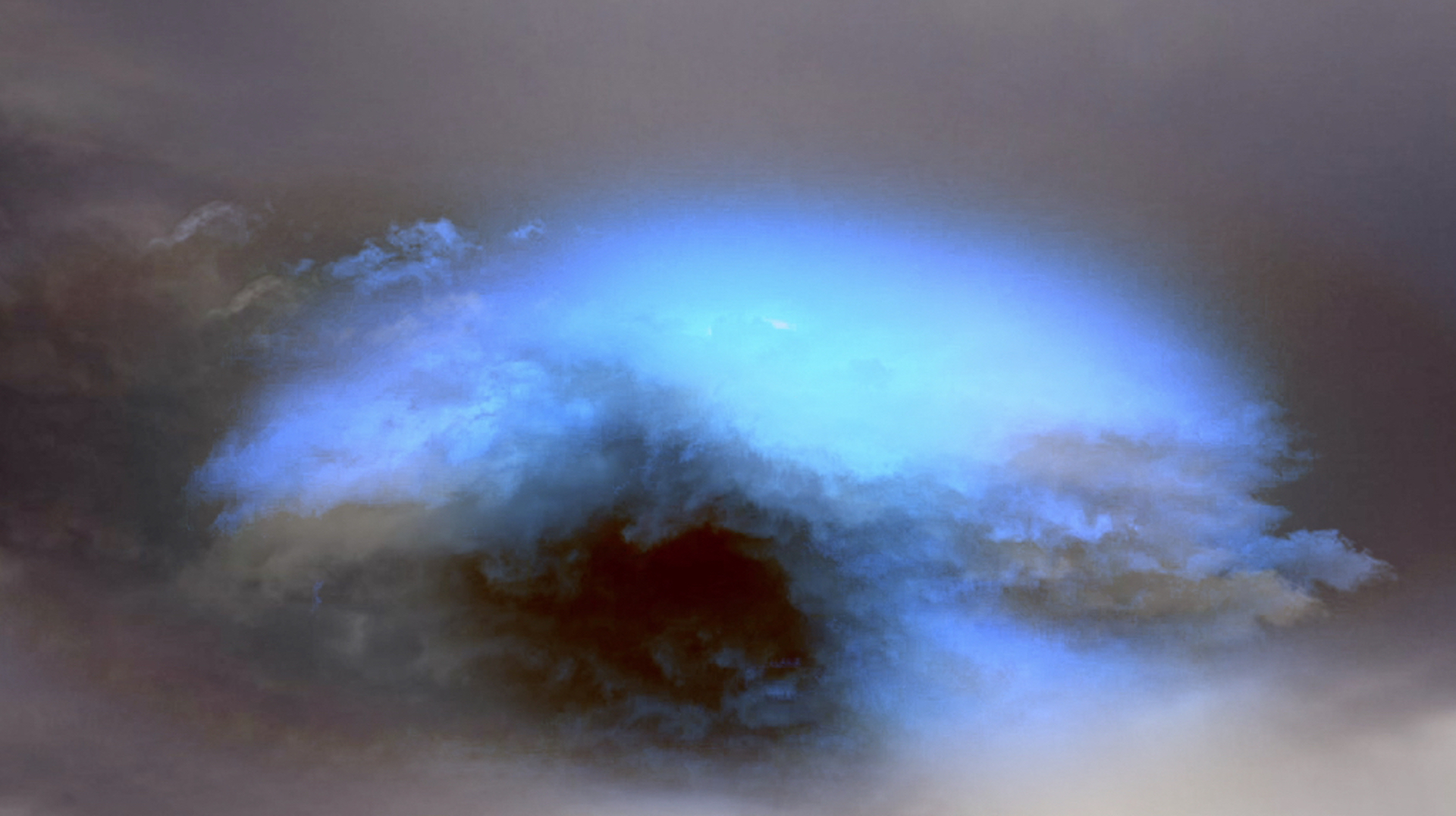 The mysterious account of the prophet Ezechiel in the Old Testament is one of the most spectacular visionary experiences in literature. It raised a lot of speculation. Erich von Däniken interpreted the prophet’s vision as an ancient spaceship. A discussion erupted subsequently. The most astonishing development was the investigation of a NASA-Scientist. Josef F. Blumrich wanted to disprove Däniken’ s . In the he changed his opinion and wrote a book “The Spaceships Of Ezekiel”. He not only followed Däniken’s interpretation but did also a plan of the 1974. It is indeed very surprising if we look at this model from today’s point of view: It definitely looks like a drone. There are also strong similarities with the later Mars rover. Drone’s weren’t invented in 1974.

Of course, this interpretation wasn’t accepted by theological readers. The prophet spoke of “God’s glory” he had seen.

The visionary account is so interesting because it goes far beyond any simple explanation. It is a truly visionary experience which questions reality. It is something from a higher reality. The technical description which intrigued Däniken is certainly one surprising fact but there is more.

There is an incredible richness in imagination and part of the imaginary is as in other sacred texts the use of fire. The vision begins with a sighting which includes fire: 4 “And I looked, and, behold, a whirlwind came out of the north, a great cloud, and a fire infolding itself, and a brightness was about it, and out of the midst thereof as the colour of amber, out of the midst of the fire.” (Ezekiel 1, King James Version, 4). The North was often the direction where divine beings appeared. The fire had also a certain color. As mentioned in “Black Fire” certain colours are often important in these mythological texts.

If we go further through the words of the prophet the fascinating imaginary unfolds. As any real otherworldly encounter it has overwhelming and disturbing character:

“5 Also out of the midst thereof came the likeness of four living creatures. And this was their appearance; they had the likeness of a man. 6 And every one had four faces, and every one had four wings. 7 And their feet were straight feet; and the sole of their feet was like the sole of a calf’s foot: and they sparkled like the colour of burnished brass.” (Ezekiel 1, King James Version). The supernatural quality of the entities is clearly emphasised. These are not the kind of angels we know, this is something we can’t easily comprehend.

And again fire and light becomes an important aspect of the further description of the apparition: “13 As for the likeness of the living creatures, their appearance was like burning coals of fire, and like the appearance of lamps: it went up and down among the living creatures the fire was bright, and out of the fire went forth lightning”. (Ezekiel 1, King James Version). The description sounds somewhat like the spaceships in Steven Spielberg’s CLOSE ENCOUNTER. Spielberg’s Ufos appeared mostly as extreme bright lights rather the notorious discs. Vice versa we could also say that the bright coloured spaceships in Spielberg’s movie had this quality of a divine appearance from the Old T. /p>

Perhaps the interpretation of Ezekiel’s vision as a spaceship is too simple. It is a mind-blowing experience, something which goes beyond our understanding. There is one more aspect, which adds to the unique quality. It is also the one aspect which made even the most sceptical readers of Däniken’s ideas wonder: This is the mention of the wheels and their incredible qualities:

“16 The appearance of the wheels and their work was like unto the colour of a beryl: and they four had one likeness: and their appearance and their work was as it were a wheel in the middle of a wheel. 17 When they went, they went upon their four sides: and they turned not when they went. 18 As for their rings, they were so high that they were dreadful; and their rings were full of eyes round about them four.” (Ezekiel 1, King James Version). The description of some sort of a machine made of wheels led to the invention of the “OMNI-wheel” in the 70ties. It is really surprising to find such a technical thing in a text from 500 BC. It indeed resembles the mechanics in today’s space probes. However, it is important to see all aspects of the vision: If we look at the whole picture there is more then just a probe or a drone. It reflects visionary encounters in the purest qualities. It resembles also modern sightings and experiences in otherworldly journeys. It is more like the window to another reality opened. Fire is often the harbinger of the arrival of these divine appearance and supernatural encounters. The power of the prophet’s imagination is the fact that it doesn’t allow simple interpretations.

There are more similarities to modern visionaries and their reports: Ezekiel sometimes is described as a possessed person. He shares the destiny of many witnesses (also modern Ufo-witnesses). The vision is a life-changing moment. It is the experience that reality is not what it seems to be.

What we also learn here is that visionary encounters are rich in imagination and there are many variations. But the underlying nature of such encounters that there one behind all these incredible stories. The phenomena can appear differently and allows many interpretation, “The Gods exhibit many faces of themselves”.

A tunnel is a typical mythical image often seen in connection with the forest. The tunnel is also an icon for the gateway to the afterlife. In most near-death-experience the tunnel and the light are common elements of the visionary experience. The connection with the forest makes sense: “it is said the forest is a standard icon for the crossing in to the netherworld (in the hero’s journey)“.

A tunnel has often a hypnotic energy. We cannot resist entering the tunnel. Even if the tunnel is dark we are drawn towards it. A tunnel often means change. When we leave the tunnel we enter a new world. Sometimes also things happen inside the tunnel, which change the person who entered the tunnel. Tunnels are also a typical motive in literature and folklore for magical events like time-travel: a person enters a tunnel and leaves after a short time, but much more time has passed outside the tunnel. And in some cases you never leave the tunnel. Or you enter the tunnel and when you leave you end up in a place far away.

The tunnel is in reality a gateway but its also another archetypical image for transformation. Tunnels can be metaphors for significant turning points in life. Crossing the tunnel is often connected with “Rebirth” or “Resurrection”, which is a theme in my movie project.

In that way the tunnel has a positive meaning. However can we sure if we stand in front of the tunnel? Reality close to the realm of the afterlife or the netherworld is full of deceptions. Sometimes it might be possible that the tunnel is a trap but it is hard to resist the temptation. The temptation is there because the tunnel experience seems such a common feature in visionary encounters. It’s something everybody knows.


In Near-Death-Experience the tunnel is like a standard, a fact, something which always happens. An interesting question would be if in a certain situations somebody could project the image of the tunnel into our consciousness in order to provoke an action or lure us into the realm of the otherworld.

For example in the famous story of Rip Van Winkle the protagonist is lured into a hollow which is actually a place of supernatural powers when wandering through the wilderness of the Catskill Mountains. He falls asleep and discovers shocking changes when he awakes. Furthermore when he returns its 20 years later. It’s not revealed if the hollow was really there and where Rip Van Winkle really was all the time in the short story. Sometimes a tunnel or some hole in the forest isn’t what it seems.