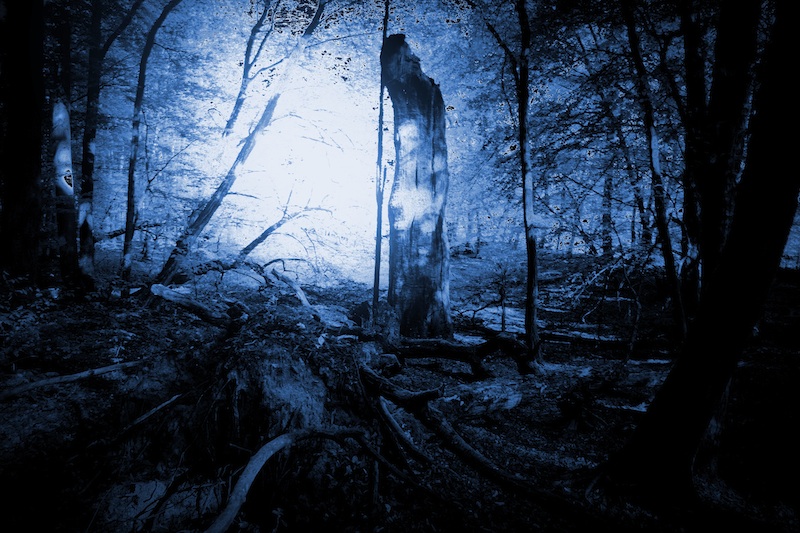 Is a “paranormal forest” the same as a “haunted forest”? Isn’t that splitting hairs? Yes, but if we think about this further there is a slight distinction. Even if we believe in a “real haunted forest” the word haunted insinuates often a fictional element like the good old story. If we look what’s maybe paranormal about a forest we might get closer to some real phenomena. There are even many things yet to discover which sound fantastic but which are not necessarily supernatural. We are far away from knowing anything about nature and our forests.Over the last years scientists discovered more and more real wonders of nature in our forests. We already know that trees and plants can emit chemicals into the air which help them to communicate with other trees. They warn others about dangers for example. They’re also taking care of their offspring and their neighbors. On old beech tree controls the way his offspring grows up. But trees and other plants are also linked underground. In a BBC article, „Plants talk to each other using an internet of fungus“ we learn some fantastic insights about the „wood wide web“. It says, that „most of mushroom bodies are made up of a mass of thin threads, known as a mycelium. These threads act as a kind of underground internet, linking the roots of different plants. The mycelial connections help plants to exchange nutrients and information but even to commit „cyber crime“.

Trees help each other out. A German ranger, Peter Wohlleben, who wrote a book about „The secret life of trees“, showed a reporter the overgrown remnants of a tree which was cut a long time ago. He is still alive because he gets supported by the trees in his neighborhood.

There is not only friendliness among the trees in the forest. The wood wide web is also used by plants which produce a biological phenomenon called „Allelopathy“. “Allelopathy” means that an organism produces biochemicals which influence the growth, survival and reproduction of other organisms. Simplified there are hostile plants in nature which could send something like a „computer virus“ through the underground web of mycelial connections.

It’s well known that they can do this with some odors but „these fungal network make communication between plants, including those of different species faster and more efficient“, said Kathryn Morris, a chemical ecologist.

These are fascinating facts but that doesn’t make a forest „paranormal“.

It’s interesting that the idea that „all organisms are connected and that they can communicate collectively manage resources” occurred 2009 in James Cameron’s blockbuster „Avatar“ (BBC). In the movie lead character Dr. Grace Augustine says: Цhat we think we know – is that there’s some kind of electrochemical communication between the roots of the trees. Like the synapses between neurons. Each tree has ten to the fourth connections to the trees around it, and there are ten to the twelfth trees on Pandora…

It seems, there is some truth to this. A lot of the mechanisms are still not understood. But if we take this further there are many possibilities which even link to some paranormal phenomena attributed to forests around the world.

Maybe certain smells and gases which are emitted by trees have an influence on animals and humans.

There is no evidence to this, but in some cases “lightheadedness” was reported in forests among other phenomena. What if there are biochemicals in the air which hasn’t been discovered yet?

And we know for example that so-called „magic mushrooms“ have tremendous hallucinogenic potential. Where does that potential come from?

If we think of the internet, the wood wide web could also work as a data storage.

Another question would be if plants and tree could form some sort of collective consciousness.

Some thoughts might be highly speculative, and we don’t know if we’ll discover any kind of wonders in the future but one thing is sure: the intelligent infrastructure of our forests is a striking argument to protect our forests and stop their destruction.