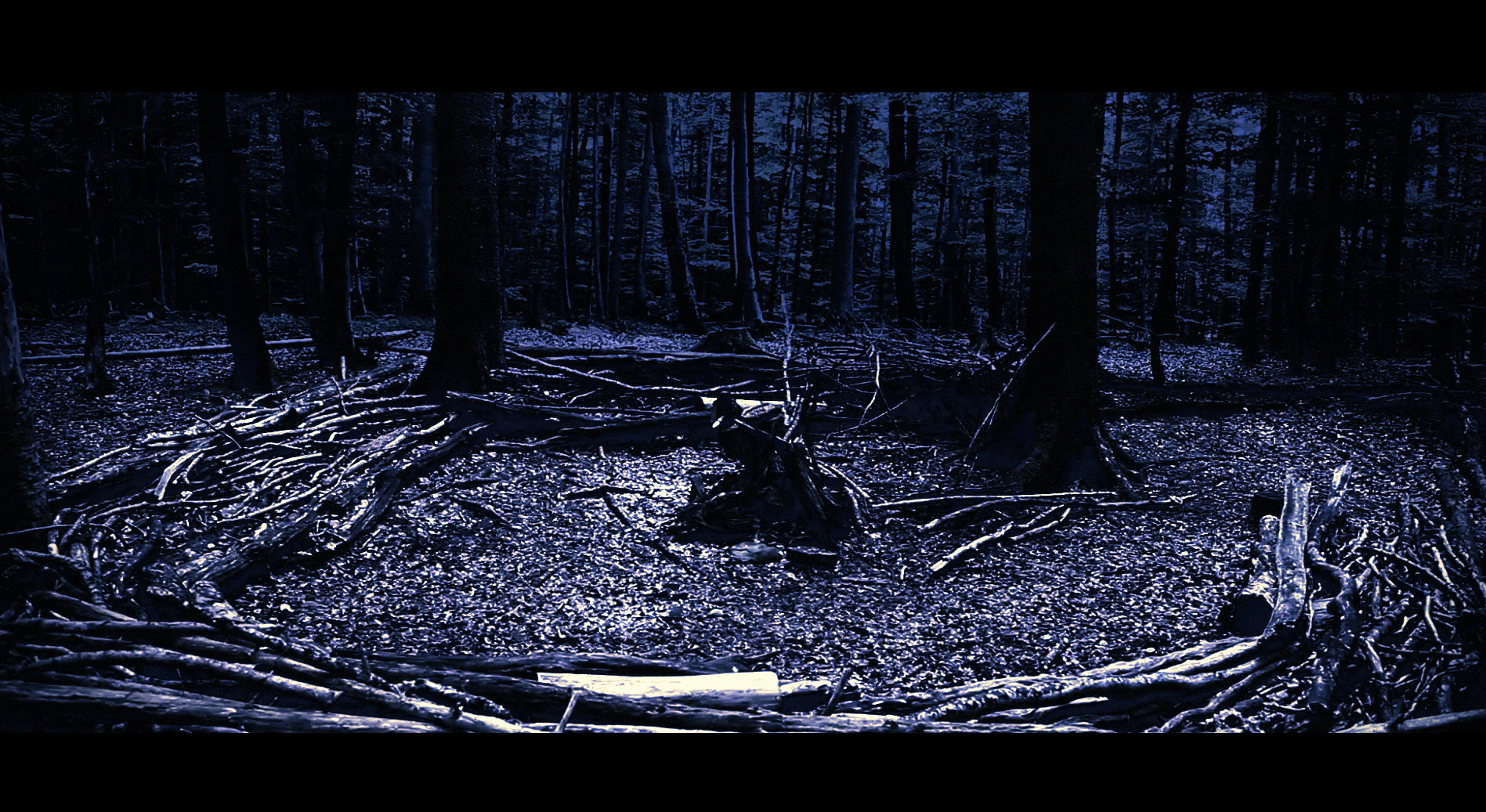 Folk horror is often about a cursed landscape. Somehow the place where the story takes place is bewitched. We don’t see the ghost, the witch, the demon. The Folk horror genre is much about landscape shaping our minds. It’s about the elder gods which are still here, somewhere. Playing tricks with our mind. Demand a human sacrifice. In a remote town a secret cult is still worshipping the old deities. The most notorious places are the woods, these damned forests. Movies such as In The Earth or Midsommar pick up these traditions. However, some contemporary folk horror seems more like a revival of genre movies as The Stone Tape and books from the last century, instead of taking primarily inspiration from the real world.

It would be very interesting to know when we started to rely more on previous writings and creative products rather than taking the inspiration from the “original” ( a place we visited, an experience we had). Or is it a mix of inspiration from the real world and former movies and novels?

Horror movies or forest horror movies sometimes claim to be based on a true story. Or they are mockumentaries as Blairwitch. However, as N.E. Genre pointed out in Beyond Blair Witch, the story of the Blair Witch benefits from a rich cultural heritage. An example is the stickmen, a well-established motive long before Blairwitch. Most of the stories we experience in books or films are more rooted in previous works or collective consciousness rather than any actual existing rituals or events. That doesn’t mean that magic belief, folk traditions, and even the idea of a landscape as a magical spiritual character isn’t pretty much alive. Thanksgiving is a good example. Many pagan Earth-God rites had been absorbed by Christianity. Christian practices are sometimes the same thing under a different label. But this is not the primary marketplace where most fiction takes inspiration from and starts off.

Movies like Wicker Man or The Stone Tape are from the 60ties and 70ties. It was a time of changes in society. There is often some subtext about undercurrents in society. But even then, at that time there was a strong tradition of literature. The ideas were not new. So, where are the real roots of folk horror and today’s stories in the woods?

The landscape was always a factor: The folk tales connected shapes in the landscape to mythical stories. For example, the devil created a block of boulders in a mountain forest. Or he created a canyon which spurred a new local legend. A mountain top with frequent wild weather is the witches’ dance place. We still find the remnants of ancient rituals in the fields and the forests. There are monuments. Neolithic stones, druid stones, and hill graves are reminders of a mysterious past. The remarkable works of modern fiction came much later.

Another background is tradition, folklore, practices in rural regions, symbols, and the rumors and remnants about pagans and their sacrifices. And to be clear: If it seems that modern folk horror in movies such as Wicker Man is connected to earlier works in literature, this is about the premise, the basic models for stories, and not the world of the film. The writers and moviemakers did a lot of research. They used “original” motives such as the Green Man or that “wicker man” sacrifice, which is rooted back in Julius Caesar’s descriptions of the Gallic War.

But again, our modern movies and folk horror stories usually don’t refer to this ancient connection between men and landscape or the “local legend“. The most influential stories were written at a time, when the connection between men and nature was already lost. These works, often novellas, were written in the late 19th/early 20th century. It is the period H.P. Lovecraft describes as the modern era of horror in his essay Supernatural horror in literature. Algernon Blackwood, Arthur Machen, and M.R. James are among the most prominent writers of the weird fiction genre. Algernon Blackwood established modern forest horror with supernatural stories such as The Wendigo and The Willows. John Buchan, a Scottish writer, wrote Witch Wood (1927) about the existence of a witch sabbath in the Caledonian forest. The Place called Dagon from the same time period deals with a secret cult. Fiction writers in turn were in some cases inspired by anthropological research, for example, The Witch Cult In Western Europe by Margaret Murray. These stories attribute a lot to the modern idea of the damned forests and the world of folk horror stories. I can fairly admit that my Forest Dark Movie project is also inspired by the weird tales.

Lovecraft writes that ” Serious weird stories are either made realistically intense by close consistency and perfect fidelity to Nature except in the one supernatural direction which the author allows himself or else cast altogether in the realm of phantasy, with atmosphere cunningly adapted to the visualization of a delicately exotic world of unreality beyond space and time, in which almost anything may happen if it but happen in true accord with certain types of imagination and illusion normal to the sensitive human brain”. This may not so much about the later so-called sub-genre “folk horror” but he describes the modern conception of a genre which emancipated itself from romanticism and the patterns of gothic literature.

Of course, Lovecraft adds a lot to the genesis of the modern weird tales with his writings. Strange rituals in the woods and cosmic fear are a constant theme in H.P. Lovecraft’s writings. And we find many traces of this early 20th tradition in modern literature, as in “The Ritual” by Adam Nevill, which became a successful movie. “The Ritual” is one of the most convincing examples of a book and a movie, which explore both genre traditions but is also rich in a unique first-hand experience of the wilderness.

It is interesting that the modern weird tale, which is in some ways a foundation of folk horror and forest horror stories, emerges in the times of modern industrialization. Usually we wouldn’t associate the fin de siecle with a “back to the roots” or “a back to nature” (even though movements existed). But isn’t it, that there was a disenfranchisement from nature in modern times? Maybe this is the reason for the rise of haunted landscapes and damned forests in fiction in the first place. That kind of precursor of the folk horror weird tale and movie was less popular after the war. Science fiction was popular, and this was less about Lovecraft’s cosmic fear of alien visitors or invaders.

However, the landscape is a crucial element in Stephen King’s writings. Perhaps, “The Children Of The Corn” could be seen as folk horror. And most prominently, there is “The Lottery” by Shirley Jackson. These stories also center around a central premise in folk horror: The remote town with a secret (pagan) cult and human sacrifice. There is a continuous tradition here, even if it wasn’t labeled as a subgenre.

Researchers have spent a lot of time exploring the roots of folk horror and the dynamic in the genre’s development. An excellent source for further information is the Eldritch Archives on YT. There is a hint, for example, about the role of the Salem Witch Trials in the genesis and development of American folk horror.

There are times when curiosity arises about the mysteries of the landscapes and the forests. Janet and Colin Bord are writers and researchers and published books such as “Ancient Mysteries Of Britain” in the Eighties and Nineties. Everywhere that old heritage became popular again. Meanwhile, there are endless books about monuments, secret old places, old rites, ritual sites, and mysterious places. There is a new interest in the land.

What are the best strategies for folk horror and forest horror? We should be aware of an obvious question. Do we still take the ideas of haunted landscapes, cursed places, and the influence of the landscape seriously? Do we believe that landscape, the dark forest, or the holy mountains are more than a shape, a mass of stone, or an arrangement of trees? What about psycho-geography? Does that mean that places have psychological influence, or is there more to it? Are the elder gods still here?

We don’t need to believe in dragons, but the mere stability of the genre suggests there is more to its central motives than we think. The most convincing stories and movies will sell “the idea of an unreal world constantly pressing upon ours” (H.P. Lovecraft) in a fresh manner, and will tap deep into realities which haven’t been told yet.

It is also clear that if the folk horror genre and forest horror want to succeed continuously in the future, they will become less revival and more fresh and original. “The Ritual” or “The Reddening” are some excellent examples.

They represent a curiosity about the eerie landscapes and mysterious monuments surrounding in our everyday world.