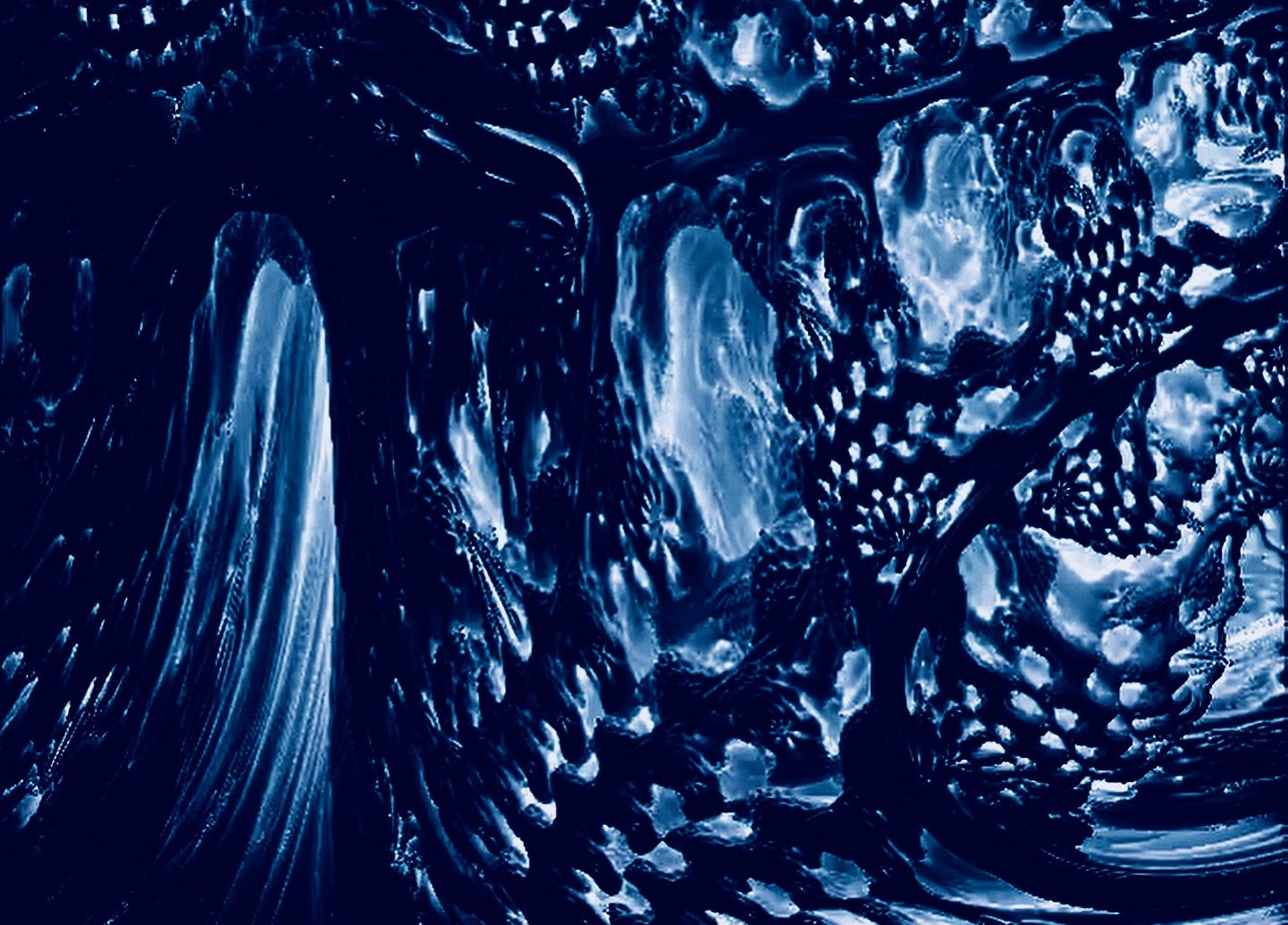 Is there something that the forest and the cosmos have in common? What if we could look at the hidden fabric of the organic structure and the connections in the endless cosmos filled with myriads of stars and galaxies? Are there similarities and is there a network that will challenge our idea of reality? Science-fiction series as Star Trek – Discovery even suggest a similarity between the network of fungi in the forest and hidden gateways in the Universe.

An important discovery in biology coined the term “wood wide web”. This refers to the so called Mycorrhizal networks. These are underground connections between plants and trees and allow the exchange of nutrients, water, carbon and even information. Fungi create this underground network which resembles in some way the world wide web.

The mycorrhizal network is a hyphal network. This is a branching filamentous structure. The hyphal network is created by fungi. It looks like a basic structure model or a concept with strong similarities as the branches of trees, the structure inside leaves, the neural web inside the brain or on a large scale the connections between clusters of galaxies in the universe.

However the Star Trek Discovery creators brought this concept to another level. Here it is not only a sort of similarity. What if there is kind of a sub-dimension with such a network which allows teleportation between far distances within the universe? It would have been interesting to see the faces of decision-makers when the series’ writers pitched the idea of the spore drive in the first place. The whole concept is even for the most open-minded sci-fi fans hard to buy.

The idea in Star Trek Discovery is indeed that there is similarly to the “wood wide web” a network of fungal spores throughout the universe called the “mycelium”. What’s so special about them is that they could also permeate “sub space”. A ship which could have some “interface” with this network could travel from space to subspace and back again to space. Ethan Siegel described the concept excellently in a recent Forbes article.

Five Dimensions and Dune as a precursor

Of course, there is strong criticism about this concept, but if you add a fourth spatial dimension it could work as Ethan Siegel emphasised. Actually you have to think of a five-dimensional-reality (including time). It is indeed true that modern spacetime concepts include more than four dimensions. The root-network with the mycelium might indeed sound a bit far-fetched however it is less absurd if we take the idea not too literal.

Most of all this is not a new idea. Instant space travel between far distant points in the universe without a “journey” is a basic concept of Dune. In Dune there is the so-called Holzman-effect, which is also responsible for this kind of space travel. Furthermore there is a connection between biology and technical space travel: In Dune the “Navigators” are enabling this kind of travel. In Star Trek Discovery its the creature (the space tardigrade) in the first place and later the scientist.

The Fifth dimension is also part of Interstellar (even a Fifth Dimension is not mentioned in Dune and Star Trek – Discovery).

Is there a real cosmic root network like the Mycorrhizal networks?

We don’t know. The fourth spatial dimension is a theoretical concept. We can’t enter this higher dimensions so far. We have no clue that any “highways” or “networks” actually exist. However it would explain a lot of phenomena like suddens disappearances. Could people accidentially “fall” into that fourth spatial dimension and get caught in the network? Wild speculation. But what we see is that there is a tendency of self-similarity in the structures of the universe. Tree branches resemble neuronal webs. Neuronal webs resemble clusters of galaxies.

Another important factor is the idea that there could be physical and biological entities which exist not only in our dimension but in that higher fourth spatial dimension. They could travel instantly from one place to another and create any kind of supernatural effect in our dimension. It only needs to have some interface or interdimensional gates. Maybe a creature itself could become an interdimensional gate.

It might be a good model to explain many cases of high-strangeness and anomalies on Earth as orbs, mountain lights, strange experiences of extra dimensions, maybe even visionary experiences.

Reality mirrors The Twilight Zone, The Twilight Zone mirrors Reality: Recent articles mention the legendary series from the Sixties and its creator Rod Serling. Under the impression of global lockdowns, everyday life resembles some of the episodes of the twilight zone.

This is because The Twilight Zone is often about slightly altered reality. For example, an astronaut returns to Planet Earth. As he enters his ordinary life he finds things are not normal. There is a white fence where no such thing was before among other disturbing alterations.

However, the Twilight Zone is not about man-made changes or natural disasters. It centers often around an alternative dimension. Even it does not explore scientific insights if or not higher and alternative dimensions are possible, it takes the premise very serious. It is a premise which allows the writer to build stories. Some of these stories are mind-boggling. Some are tragic. Often there is a moral in the end.

It is interesting that it is not so much about true stories and real cases. It is also not about folklore stories. As far as we know Rod Serling was concerned with good storytelling and not so much about what we should belief or should not belief. In this sense, The Twilight Zone is rooted in the realm of science-fiction and not so much into the supernatural thriller area.

The first episode of The Twilight Zone aired 1958. This was the post-WWII period and the time of the Cold War paranoia. Traumata from WWII were pretty much alive. Stephen King described the 50ties paranoia in his book Danse Macabre. There was the shock of the Sputnik. There were fears about the communists. There was the beginning era of the A-Bomb and the threat of a Nuclear War. All in all, it was a climate of uncertainty beneath a clean and happy world on the surface. Thus the original Twilight Zone is related to disruption, contradictory feelings and kind of dissociation. Perhaps its the feeling of dissociation people experience in our days again.

Is the premise of today’s multiverse or the other world a different concept as The Twilight Zone?

Not necessarily. There is no proof but it seems that more sci-fi related premises and ideas grounded in the supernatural coming closer together. The mystery genre today does encompass both. However, even more important, some ideas about the other world which belonged to superstition in former days are now appearing in scientific research. If we look into research about quantum physics or the science of black holes this kind of Twilight Zone is more real as in the days of Rod Serling.

There is always a big question if the stories we hear from the witnesses of visionary experiences, sightings or mysterious disappearances are inspired by shows like The Twilight Zone, which has become a milestone of modern culture (even people who have never seen The Twilight Zone are familiar with modern descendants as The X-Files). Did culture form the experience as it did in more religious times when Ufos were interpreted as Holy Mary appearances? Or is it the other way around? Even if Rod Serling and his writers weren’t concerned so much about the existing folklore, Roswell and visionary experiences of Shamans they were somehow rooted in a tradition of storytelling. We don’t know.

In a sense Rod Serling might have seen things in the same way or even envisioned his Twilight Zone in s broader sense as the stories of the TV Show suggest. There is this unforgettable introduction at the beginning of the first season episodes:

“There is a fifth dimension, beyond that which is known to man. It is a dimension as vast as space and as timeless as infinity. It is the middle ground between light and shadow, between science and superstition, and it lies between the pit of man’s fears and the summit of his knowledge. This is the dimension of imagination. It is an area which we call The Twilight Zone“.— Rod Serling

Rod Serling was a true visionary. He was somebody who understands that reality is not what it seems. The Twilight Zone is the deeper reality we live in. It is what doesn’t want to be revealed. It’s what’s behind the curtain but which could enter any time our limited everyday world. We live in The Twilight Zone but only be aware of it in certain moments and certain times.