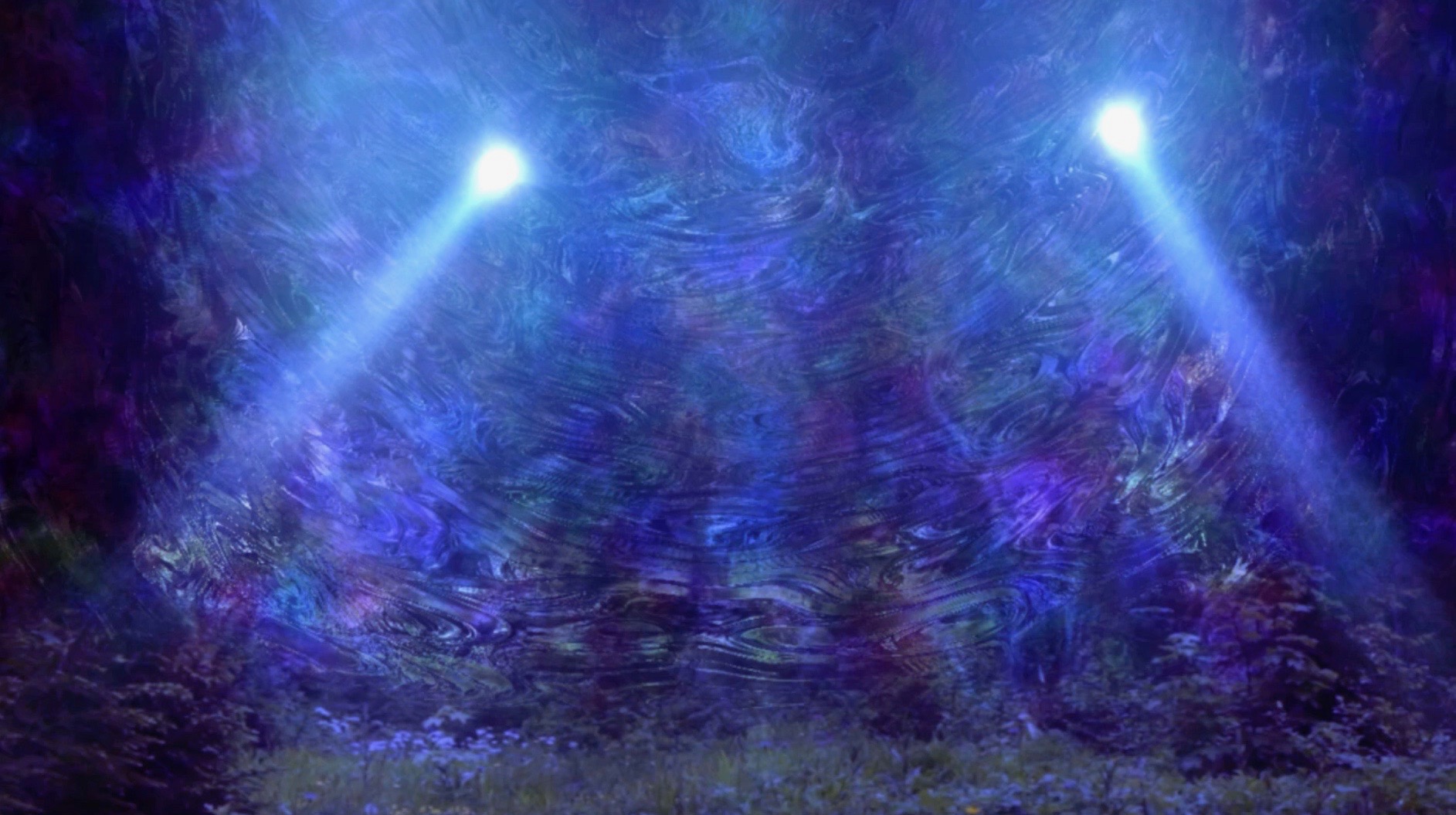 In today’s TV-series, the otherworld is presented in ways not seen before. In David Lynch’s latest Twin Peaks series a much deeper exploration of the otherworld realm happens as in the original series. The black lodge, the white lodge and some sinister otherworldly dimension appear in a much more organic way. It infiltrates the everyday world and is anything but a fantasy realm. Another excellent demonstration of a dark otherworld accompanying us is the Upside Down in Stranger Things. The otherworld had been always a crucial part of my forest dark story too. They all relate to an overwhelming tradition lasting since the origins of all mankind.

What is the Upside Down?

In Stranger Things, the Upside Down is presented as kind of a mirror world reflecting our own. It is like a distorted version of our reality: “The Vale of Shadows is a dimension that is a dark reflection or echo of our world (Stranger Things, Episode 5)”. The blue-coloured frightening dimension is a brilliant visualisation of the idea of a dark otherworld. It became also popular as the “Upside Down” effect.

An alternate dimension like the Upside Down is already described in Stephen King’s masterpieces. There are some similarities between the world of Stranger Things and Derry in King’s novel IT. Some people noticed that the other world in Silent Hill worked similarly. However, we could track this kind of alternative dimension to big feature film classics as MATRIX (which will have a reboot soon) and “Welt am Draht” from Germany’s legendary filmmaker Rainer Werner Fassbinder too. In some stories, the alternative dimension is always a kind of energy. Even the Force in Star Wars is a form of an alternate dimension. These ideas go back a long way: Dante’s Inferno describes a dark alternate dimension. The otherworld as a reflection of our world is an old Celtic idea. It exists in Greek mythology and ancient Norse mythology. It is the realm of the Gods but also of angels and demons.

The Otherworld is Real

Modern science suggests that the alternative dimension is not a fantasy. It is a reality. There are theories about a multiverse or a five-dimensional world. It relates to the experience of philosophers. It is hard to imagine a world without the existence of an alternative dimension. The mirror world is present in dreams and visionary experience. In many near-death-experience, there are accounts of an alternate dimension. There are similarities between the Upside Down and the stories from alien abductees. They experience often an alternate distorted reality before they could return to the ordinary world. The otherworld is an essential part of any hero’s journey. It is a fact that this applies both to fiction and true stories.

The deeper dimensions Of The Otherworld

If we take a closer look into descriptions of the otherworld and visionary experience we see that there is much more as the distorted alternate dimension. This dimension itself appears as a projection. It is in some way a simulation – an idea which also occurs in Stranger Things. There is something behind the veil. We are experiencing two forms of the otherworld, one which resembles our own and another otherworld which is beyond comprehension. It might be a more abstract world or a primordial world of ideas (as Plato expressed it). People experiencing the deeper realms of the otherworld are changed forever. A good example of the distinction between the alternate dimension and the deeper otherworld – The Beyond – is Stanley Kubrick’s Odyssee in Space. In the end, there is a room which is a distorted version of our reality with the 18th-century room but we sense this is a simulation. There is a palpable higher realm behind. We never see The Beyond, but we know it is there.

It is an important question if the alternate deeper dimension is just a different realm or another plane of reality or does it interact with our reality. If we take the visionary’s experience serious we can’t be sure if our ordinary reality isn’t kind of a projection. It could be the other way around: Our everyday world is a distorted version of the otherworld – see Matrix. Our world cannot exist without the otherworld.

Sometimes people purposely make attempts to enter the alternate dimension or communicate with the other realm. Psychics seem to have a natural ability to access the otherworld. “Eleven” in Stranger Things has a long history of models in fiction and the real world. In Tarkovsky’s Stalker which is also about entering alternate realms, the Stalker’s daughter, in the end, has psychic capabilities. In realties, many people who had close encounters are becoming psychics. Indeed there are many examples of telepathy, telekinesis and even teleportation in connection with the Otherworld. The alternate dimension is similar to the internet and can transport information. It is a way to access places and people far away without travelling in the physical plane. However, this is always a dangerous path since the otherworld can also be a treacherous reality.

Normal people use drugs, ritual and different devices to connect. As this is in the first place a shadow version of our world there are dangers everywhere. In the story of the Forest Dark Feature Film project, people try to make use of black fire. People going into the woods in the Witch Mountains because the mysterious lights promise knowledge. Many never come back.

In David Lynch’s Twin Peaks the log of the log lady is the device. Sandra Bullock communicates through the electrical lights in Stranger Things.

In other cases, people use any kind of magic device or practice to get something from the alternate plane of reality. Indeed, people sometimes get rewarded with knowledge about the unknown. Often a price must be paid. People getting too curious loose their mind. The alternate dimension is the realm of the dead too. Danger lurks there everywhere.