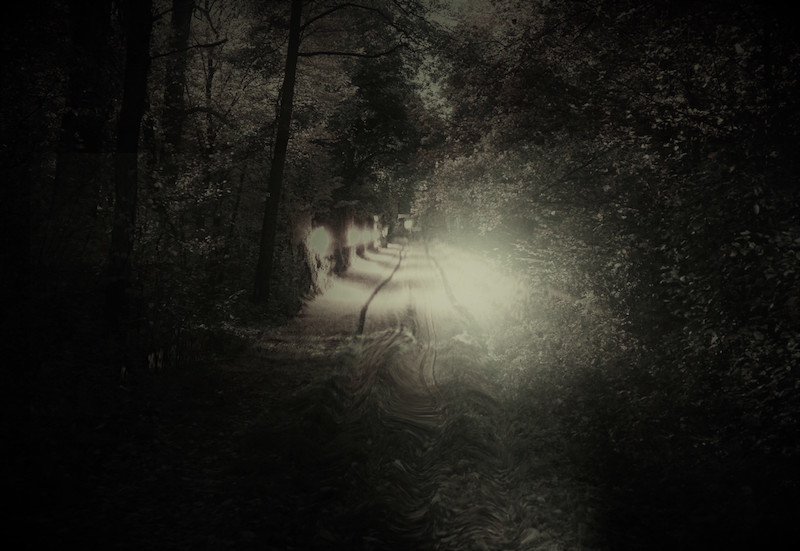 A tunnel is a typical mythical image often seen in connection with the forest. The tunnel is also an icon for the gateway to the afterlife. In most near-death-experience the tunnel and the light are common elements of the visionary experience. The connection with the forest makes sense: “it is said the forest is a standard icon for the crossing in to the netherworld (in the hero’s journey)“. A tunnel has often a hypnotic energy. We cannot resist entering the tunnel. Even if the tunnel is dark we are drawn towards it. A tunnel often means change. When we leave the tunnel we enter a new world. Sometimes also things happen inside the tunnel, which change the person who entered the tunnel. Tunnels are also a typical motive in literature and folklore for magical events like time-travel: a person enters a tunnel and leaves after a short time, but much more time has passed outside the tunnel. And in some cases you never leave the tunnel. Or you enter the tunnel and when you leave you end up in a place far away.

The tunnel is in reality a gateway but its also another archetypical image for transformation. Tunnels can be metaphors for significant turning points in life. Crossing the tunnel is often connected with “Rebirth” or “Resurrection”, which is a theme in my movie project.

In that way the tunnel has a positive meaning. However can we sure if we stand in front of the tunnel? Reality close to the realm of the afterlife or the netherworld is full of deceptions. Sometimes it might be possible that the tunnel is a trap but it is hard to resist the temptation. The temptation is there because the tunnel experience seems such a common feature in visionary encounters. It’s something everybody knows.


In Near-Death-Experience the tunnel is like a standard, a fact, something which always happens. An interesting question would be if in a certain situations somebody could project the image of the tunnel into our consciousness in order to provoke an action or lure us into the realm of the otherworld.

For example in the famous story of Rip Van Winkle the protagonist is lured into a hollow which is actually a place of supernatural powers when wandering through the wilderness of the Catskill Mountains. He falls asleep and discovers shocking changes when he awakes. Furthermore when he returns its 20 years later. It’s not revealed if the hollow was really there and where Rip Van Winkle really was all the time in the short story. Sometimes a tunnel or some hole in the forest isn’t what it seems.