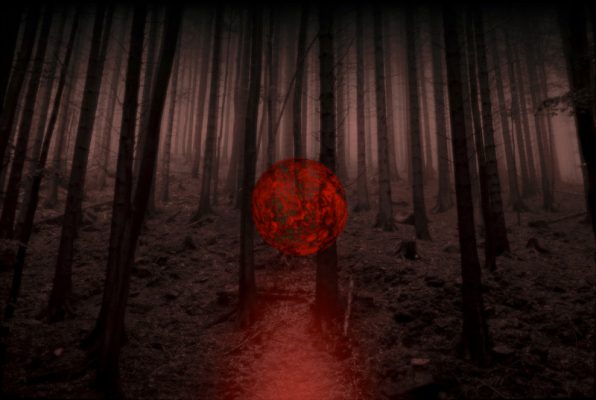 “There are also times when, as happens to a land when the sea-dykes break, the invisible forces flow in upon us and swamp our lives” (Dion Fortune). Fire is the element which means both creation and destruction and most of all transformation.

“The aim of magic is to steal the fire from the heaven” said the English artist and occultist Austin Osman Spare.

If we see fire as a form of energy it is the kind of an extreme powerful force; it is an energy both inside and outside of the body.

When we say there is fire in the air it could mean not a literal fire, but – according to some sources – an otherworldly energy, which is more like an electric field in the first moment, then the air becomes more dense and hot until finally something breaks through.

These kind of super natural events happen in stories but are also mentioned in reports about strange encounters like in “Happy Camp”, California, in a series of UFO encounters.

The best way to understand the element of fire (and its meaning in the otherworld) is the myth of Prometheus.

Fire here means also wisdom. Fire is the light of knowledge. Prometheus brought it to mankind. That’s why Prometheus was punished by the Gods.

Fire is also the transition between the spiritual and material creations”.

This could mean that the moment of transitions are dangerous because fire signals danger.

These ancient ideas could be an interesting alternative in understanding reports of contemporary contacts with the unknown; like the car driver which ended up in a strange illuminated mist,felt an unnaturally thick and hot air, lost consciousness and missed some time and later he could not remember what happened. In some of these encounters people later said they received sudden knowledge about the world which in normally unknown to mankind.

It’s also worth to think about what it means “to play with fire”. In my story somebody plays with the fire and faces unforeseen consequences.

“They will not stop until they find a victim” (Duncan, The Forest Dark Screenplay).

It doesn’t matter if we follow “a light” in the forest, or if we search for something – forest horror stories work the same way most of the time: there is danger out there and it depends on the character’s strength to not become a sacrifice. The motive of a sacrifice could be found at the core of many stories like in Algernon Blackwood’s “The Willows”.

One of the first stories of a sacrifice in the woods is mentioned in Scottish anthropologist Sir James George Frazer’s comparative study of mythology and religion, “The Golden Bough”. The book centers around the thesis that the old religions were fertility cults that revolved around the periodic sacrifice of a sacred king (see Wikipedia).

Somehow we all remember the stories of the elder gods and we know about the idea of a sacrifice. Forest stories work because we know about the inevitable, we know what will happen and hope that there is nevertheless some way out of the forest.

There is another crucial element in the old myth: a sacrifice is necessary for nature to come back to life (that’s the important element in fertility rites in spring). It could be also mean something or somebody has to be sacrificed for the other’s to survive.

Therefore the danger in our forest story does not necessarily come from the forest itself or what resides in the forest but from our companions or even our best friends. Old mythologies are still alive in our heads, therefore we should be careful whom we chose to come with us on our journey into the forest.

What does it take to think a sacrifice could please the angry gods and how long does it take until we are ready to kill our best friend?

Sometimes its not the forest which is dark. The forest shows us our own inner darkness at the bottom of our souls on our trip into the woods.