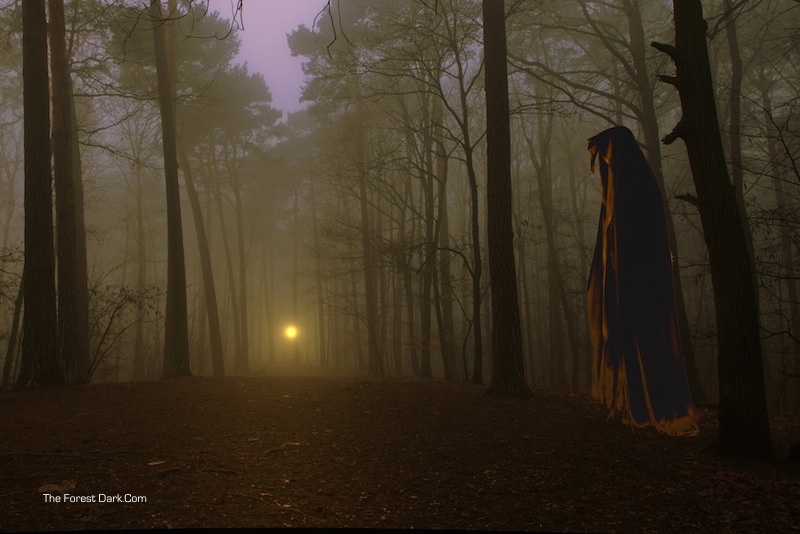 “I was guarded”. Many people share this experience. It might happen in extraordinary circumstances, but also in everyday situations and in near death experiences. Some people are convinced that their whole life was shaped by some sort of Guardian, as the famous psychologist C.G. Jung. The guide figure or protector (guardian angel) is related to Greek and Roman ideas of the personal daimon. These otherworld guides however are much more than friendly guardian angels. Carol Zaleski writes in “Otherwordly Journeys” the advent of a guide is therefore a crucial event for most medieval otherworld vision; she says that “mere departure from the body does not suffice to make the (newly deceased) soul a fullfledged citizen of the next world…in Victor Turner’s phrase, ‘the soul is bewixt and between…an otherworld guide is needed..to usher the immigrant soul into its new surroundings. In the return-from-death-story, the soul’s assimilation into the other world is, by definition, incomplete, yet the temporary visitor would be lost without the services of an experienced escort, capable of interpreting alien sight” (Carol Zaleski, Otherworld Journeys, pages 52-53).

If we take this further there are a lot of implications about the true meanings of Guardians and the hidden patterns in our lives.

If the Otherworld Journey is a crucial moment for the guiding angel what’s his function during our life-time? The most common belief is that guiding angels are protecting us; “my Guardian Angel saved me”.

But maybe this is part of a larger pattern, the preparation of the soul for the next world during lifetime. It’s interesting that the guide is also an interpreter; it sounds like the guide who helps you to understand rules and conditions in an exotic country.

Some visionary encounters and modern unexplained (UFO) encounters could be seen in a different light if we assume that we have a companion in life, either a personal daimon, a guardian angel or a psychopomp. This guide might visit us in different disguise. Perhaps he wants to teach us something about the otherworld in our lifetime. Certainly a lot of supernatural encounters in the forest look like some reminder of the nextworld.

The aliens or former fairies and demons might be not some strange visitor, but something very familiar. It could be somebody who was already here all the time.

Carol Zaleski says, “at the same time, the presence of the guide is a sign of continuity between the otherworldly journey and the spiritual path in life” (Otherworldly Journeys, page 55).

The need for a guide appears not only in Near Death Experience but also in dreams or meditation, Mrs. Zaleski thinks. “A spiritual guide is as necessary for the living as for the dead”.

It would be an interesting question if when this spiritual guide makes his first appearance in our lives if this has to be always a pleasant experience. It might be also frightening. It could be a moment of recognition, changing our life forever. This is a theme I am dealing with in my movie project. 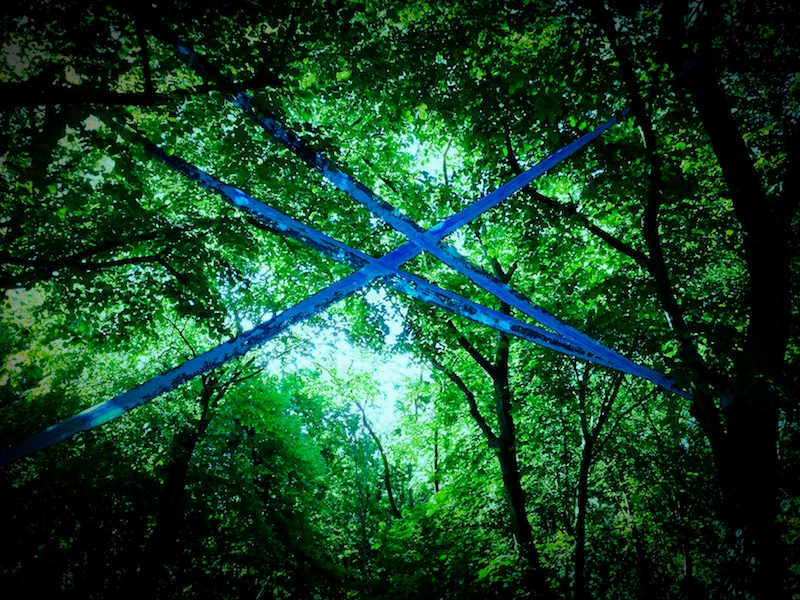 What is a forest? Is it the trees or the space that exists between them?

It sounds like a very simple question, however there is a big difference between the answers from NASA or from Ellie Davies, an excellent and fantastic British photographer, whose thrilling “ghostly-forest-photography” was recently presented on welcometotwinpeaks.com.

NASA scientists  raised that question when they discovered difference in satellite-derived maps of global forest cover. The reason was varied definitions of what constitutes a forest.  There is some urgency in the need for a definition because deforestation  is responsible for one-sixth of greenhouse gas emissions.

“The authors (of an scientific article) call for either a single, clear definition of forest that can be used globally or, preferably, a shift away from “forest/non-forest” maps to new maps of measureable ecological characteristics like tree cover, canopy height and biomass” (http://www.nasa.gov/feature/goddard/nasausgs-mission-helps-answer-what-is-a-forest)

Nevertheless the eyes of satellites in space will always see only a surface. The forests of a planet are more than carbon stock. They are living organisms, a very complex system of individual organisms interacting.

Furthermore there is a spiritual dimension here proven by the endless stories of humankind and its ambiguous relationship with the forest. For many peoples the forests were the seats of the Gods.

But is there something between the trees? We know about biochemical substances or gases emitted by plants.

Mythology however is telling us about the intangible forces in the forest. In some cases it might be some form of energy field but also even more supernatural forces which can’t be measured but encompassed by human imagination.

“A forest is what exists between its trees, between its dense undergrowth and its clearings, between all its life cycles and their different time-scales… A forest is a meeting place between those who enter it and something unnameable and attendant… Something intangible and within touching distance. Neither silent nor audible.”
(John Berger quote from welcometotwinpeaks.com, Between the Trees, 2014 Statement from John Berger in ‘Hold Everything Dear: Dispatches on Survival and Resistance’, p.135-140 Verso, 2007.)

This is also what the Forest Dark is about; “Something intangible” is there. It’s impossible to understand the forest in all its dimensions but sometimes we feel it.

The forest is indeed a “meeting place”. Sometimes we will meet ourselves there, on other occasions something strange, which was always there. 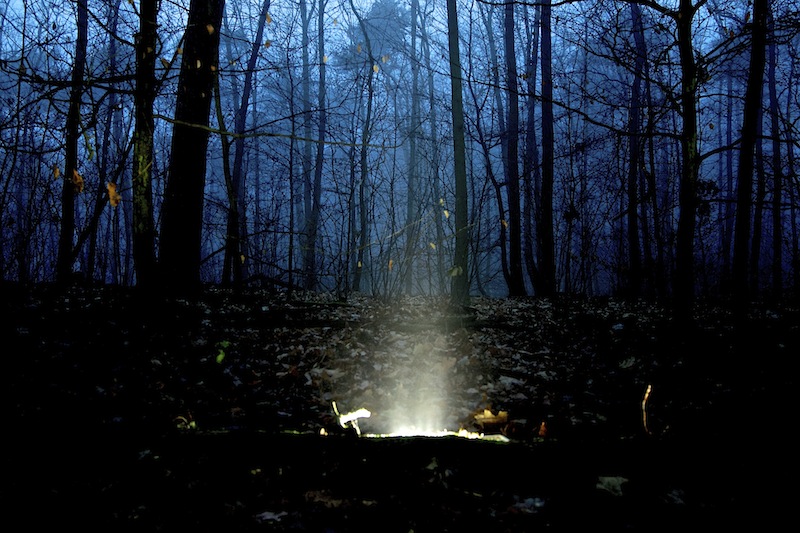 “Ghost Lights” are also known as will o’ the wisps. They seem to be a special type of dangerous lights in the forest. They’re both deeply rooted in folklore as a strange light that attracts travellers from pathways into dangerous marshes or graveyards. The scientific explanation is that ghost lights, often seen over bogs, are likely phosphene or methane gas emissions visible at night. However many reports doesn’t fit the scientific explanation. The deeply disturbing stories surrounding these anomalous lights are strongly related to the afterworld or otherworld since they are harbingers of death. Ghost lights are reported around the world. Sometimes they are related to fairies or lost souls who made a pact with the devil. They are believed to lead travelers to their demise. They are also called “fairy fires” or “foolish lights”. In Wales the light predicts a funeral that will take place soon. The old legends have many counterparts in modern urban legends.

The interesting difference between ghost lights and the more ufo-like orbs (sometimes however are also the earth-lights and ball-shaped ufos are labeled as ghost lights) is their distinct behaviour. They are acting like living-beings; like a character. They are irritating people and luring them into danger. Or they are some sort of message.  Furthermore they are often related to typical ghost-stories like the killed railway worker who becomes a spook-light and appears near abandoned railway tracks.

These stories sound often fairy-tale like or like some sort of old superstition. However it’s good to distinct between the phenomena and the belief-system surrounding it. We don’t need necessarily believe the interpretation or the good old legend but often there is truth even in weird tales.

Ghost lights are one of the many mysteries in our dark forests. There are so many sightings and even in our modern world ghost lights are reported a lot.

They do represent a real phenomena.

The associations with the realm of the dead in many stories suggest that they appear in zones where our dimension overlaps with other realms of the otherworld.  These intermediate realms have become an integral part in my movie project. I haven’t seen ghost lights so far but will do further research since this seems to be one of the most common paranormal phenomena in many forests.

Furthermore the quality of something which leads you away from the ordinary world into a different realm is a very interesting aspect of this phenomena.

Perhaps ghost lights are the visible call of the otherworld.

Ghost lights appear not only in folk tales. John Milton uses the phenomena in a metaphorical sense when he implies Satan in the description of the mysterious ghost light in “Paradise Lost”:

“Hope elevates, and joy
Bright’ns his Crest, as when a wandring Fire
Compact of unctuous vapour, which the Night
Condenses, and the cold invirons round,
Kindl’d through agitation to a Flame,
Which oft, they say, some evil Spirit attends.
Hovering and blazing with delusive Light,
Misleads th’amaz’d Night wanderer from his way
To Boggs and Mires, and oft through Pond or Poole,
There swallow’d up and lost, from succour farr”