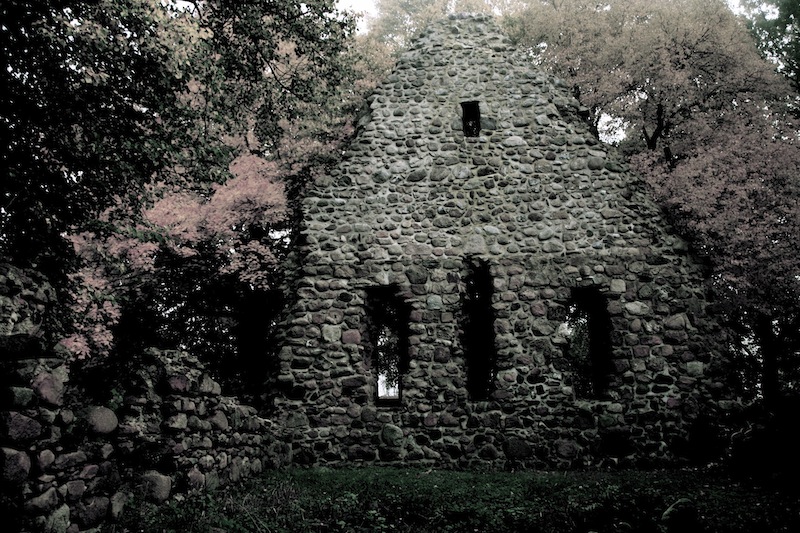 Our modern ideas of the supernatural and the other world are strongly influenced by the famous “Gothic Novels”. Anne Radcliffe among other writers created a new genre in the 18th century. The works of these novelists have a strong influence till today. The gothic literature is usually part of the dark romance, which emerged as part of a counter-movement in the times of the enlightenment. The gothic novels deal with hauntings, murder, demonic characters and passion. In Lewis “The Monk”, one of the most disturbing and strongest works of the Gothic Novel genre, irresistible superhuman evil forces are driving the characters into their doom. Often the hero of the Gothic Novel is damned but also somebody looking for freedom, even no one escapes his fate. Gothic literature doesn’t necessarily always deal with the supernatural but there are two strong elements we find in most Gothic novels: a certain atmosphere, which gives us an uncanny feeling and a distinct landscape. The landscape is somehow a landscape of the mind even it’s the typical wild romantic places we still find today, which often modelled the landscape of the Gothic novel. The German mountains, wild-cliffs, Dartmoor, a castle or a monastery far away from civilization and of course the forest.

The forest is nearly a stereotype in many elder and contemporary works of gothic literature. Interestingly it describes an idea of the forest, which didn’t even exist so much any more when the genre became successful. In the beginning age of science most European forests had already been cultivated. Johann Wolfgang von Goethe had to do long journeys to find the rural and wild landscapes which inspired “Faust”.

However, if we talk about the strange feelings like „wandering longingly through the forest in search of mystery (Werifestia), we have a certain idea in mind.

And the Gothic forest isn’t necessarily a primeval forest, it can be a place where once a castle or a monastery stood and where the wilderness reigns again. Even more, some of our forests have become Gothic and haunted forests because they are full of remains of human architecture. Romantic painter Caspar David Friedrich loved the ruins in the forests he found in his homeland, for example Saxony Switzerland.

„Searching for mystery in the forest“ means also our interest in the afterlife. We find derelict buildings, medieval walls and once proud castles, which lie crumbled in the middle of the forest. These gothic landscapes tell us our destiny. There is something stronger then we. We can cultivate the forest but in these places nature and wilderness have the last world. Maybe one day the whole civilization will become a gothic forest.

Why are we attracted to these places where we find nothing but decay? Why do they create that strong atmosphere we hardly could resist? Why is the gothic forest such an archetypical image?

Some of us love to visit from time to time the ruins in the middle of a dark forest with fallen leaves everywhere, where no sun reaches the ground. Moss and lichen are growing on the stones and walls. These places are sometimes damp and wet with an unhealthy air. Nevertheless, there are even people who sleep in a megalithic tomb in the forest. And yes, sometimes the imaginary of the Gothic Forest is the image of a tomb or graveyard.

Maybe its because they remind us of the larger forces at work on this planet. The reign of humans might not last forever. As we all know any civilization or society has a beginning, a culmination and a time where it declines until it collapses and dies. There is no reason why modern western civilization should not share the fate of the Old Romans despite its technical process and its supreme power. But nothing vanishes. Even we see destruction and decay in the gothic landscapes at work somehow the Gothic Forest as an image could mean also the place where something is stored like in a storehouse of images. Naturally such a place must be haunted, because the end is never the end. It’s certainly no coincidence that the gothic imaginary as part of the Gothic novels or in the paintings of the dark romance became so popular when in 18th century modern science and later modern technology replaced spiritual imagination and drove the old demons out. The Gothic forest might be the appropriate image for what’s missing in the modern world because it represents exactly what we don’t allow us to see in a clean and safe technological environment. Maybe even in Silicon valley where everybody is young, healthy and good-looking there are dreamers who imagine a Gothic Forest from time to time. It’s the wilderness we are longing for.