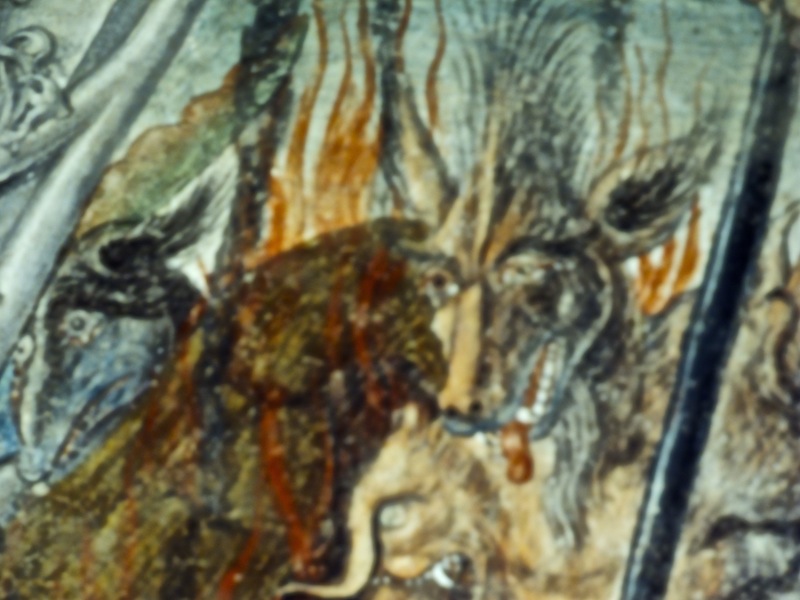 A new game. Every year. As long as you continue your quest you have that desperate moments where you feel you ended up in some poisoned hinterland ruled by twisted gods. Our best intentions turned upside down and when we accomplish what we hoped for an unexpected twist turns our fate. It’s a very old idea that some wicked forces are behind the ups and downs, if it’s only our own inner demons or some supernatural entities we don’t know. And even if we play this game or if we are played by some puppet master we can’t say. Our making and doing might be under some spell like Thorin Eichenschild’s fateful quest.

H.P. Lovecraft describes in his anthology “Supernatural horror” that Nathaniel Hawthorne created in his stories a universe driven hy hidden forces: “Evil, a very real force to Hawthorne, appears on every hand as a lurking and conquering adversary; and the visible world becomes in his fancy a theatre of infinite tragedy and woe, with unseen half-existent influences hovering over it and through it, battling for supremacy and moulding the destinies of the hapless mortals who form its vain and self-deluded population. The heritage of American weirdness was his to a most intense degree, and he saw a dismal throng of vague spectres behind the common phenomena of life; but he was not interested enough to value impressions, sensations, and beauties of narration for their own sake”.

This is primarily the analysis of a fictional world, but we know H.P.Lovecraft’s cosmic fear was a very real one. In some moment we might also think we live in a world where unseen forces have an influence we feel somehow, particularly at special places or times. We may ask how to deal with these demons.

When we reflect upon our relationship with the Otherworld it comes soon to exchange or communication between humans and demons or other otherworldly beings.  As in the ordinary world it’s very often about getting something in exchange for something else. In the classic psycho thriller “Silence Of The Lambs” FBI agent Clarice Starling wants information from serial-killer Hannibal Lecter. To get that information she has to offer something in return – “Quid Pro Quo”. Lecter demands to know about Starlings most innermost fears. “Silence Of The Lambs” is not a supernatural thriller but in some sense Hannibal Lecter is a very demonic figure. By forcing Starling to reveal herself he becomes kind of a vampire. It seems like he wants her psychic energy.

Patrick Harpur says in his excellent book “Daimonic Reality” that “there is a touch of vampire about the Otherworld”.  Harpur examines the deeper meaning of many folklore stories as modern alien abduction cases; Harpur writes that “it should be mentioned also, in passing, that otherworldly beings feed directly off on occasions, such as when fairies kidnap men to assist in their games or wars. The mere presence of humans seems to be a source of strength, as if daimons draw on our psychic energy to give themselves substance. In return, we receive the gifts of clairvoyance, healing and occult knowledge – the skills, in other words, of mediums and shamans, cunning men and wise woman… The daimons need to take  – or exchange – our food, blood, power of procreation and our offspring. In other words, they need what is most substantial and vital to us. They need our life. And this is why the Otherworld is also, implicitly or explicitly, the Underworld or afterlife”.

Can we ever win this game? Can it ever be “quid pro quo?”

From the very beginning of mankind humans tried to redeem or use the demons through magic rituals. The manuals are sheer numberless. A lot of hermetic knowledge exists, and traditions were developed over hundred of years. However success is often short-lived. In our days most magic is seen as superstition, even magic belief is much more alive as we think. Nearly everybody performs his little rituals to keep the demons away. But often we fight a battle on lost ground. The tricksters will not be tricked. As long as we hope or we fear for something we could become an easy prey since we put ourselves in a more vulnerable position. Time is important for us. What if you have an opponent to whom time doesn’t play a role because he is eternal? And the most simple question remains still to be solved: do we know what these phenomena really are; something external like Hawthorne’s “vague spectres” or something more internal, more psychological? Maybe it’s both.

Your only chance is get an idea what they want from us. If we could understand them, see the world from they perspective we might be in a better position to deal with them.

Following Mr Harpur’s insights its much more complex to really understand what the Otherworld wants from us.

The first question is, is there necessarily always a relationship between humans and the Otherworld? When I wrote about the wild hunt, which roams the forests in the rough nights, we could also think about raw unmediated energies, which are more like some force of nature (like a tornado for example); some records or folklore stories sound more like the story of a person at the wrong place at the wrong time. H.P. Lovecraft imagined monstrous or giant supernatural beings, which doesn’t seem to have any interest in the human race; they could simply destroy us without any purpose by blowing their nose.

On the other hand there seems to be a very deep and close relationship between humans and the demons of the Otherworld (or daimons as Harpur prefers to describe them). The daimons seem to interact with us on a very intimate level – in our dreams. Harpur writes “What the daimons in dreams seek is our ability, through reflection and pondering, through all our making and doing, to give shape to their dynamic shape-shifting; to order and discriminate their chaos; to body forth their ethereal volatility; to express their, not the ego’s perspectives. This is the ‘strength’, the substance they seek. It presupposes that we recognize, accommodate, and even revere them, for, if they can only know themselves through us, it is only through them that we can know our own deepest selves”. The last words are very interesting: “know our own deepest selves”. Does that mean that there is already some hidden (demonic) potential in the human soul? Usually we think that demons are some kind of evil spirits, which can take possession of a human being. Maybe there are other possibilities, not necessarily the “inner demons” but different ways of thinking, capabilities and a second identity we are not aware of in the daylight; a potential which is activated under special circumstances. It’s through dreams and otherworldly encounters we understand our own nature.

We can gain lost knowledge. This is also what initiation is about. Today a lot of people seek “shamanic initiation”, but our traditions are lost. We don’t know any longer how to deal with the daimons. Stories of missing people who went into the woods and people simply going crazy after some drug abuse or people who are suddenly confronted with series of uncanny and unexplained events might be cases of initiation gone wrong; Psychologist C.G. Jung speculated about a phenomena he called “synchronicity”, when the psychic live is mirrored in the material world and weird coincidences happen. We need to be careful when dealing with demons: as we know from the case of “Dr. Faustus” we might not only lose our lives but our soul or we might get changed forever like Agent Starling after her encounter with Hannibal Lecter.

So, why would you want to “deal with demons”? Why not avoid the Otherworld in general?

On one side otherworldly encounters seem to be an appropriate preparation when entering new stages in life and – as many tribal cultures believe – a preparation for the journey into the underworld (afterlife).

On the other side there is another group of people who at least need to “consult” the daimons from time to time. It’s the artists, the writers, the musicians, the filmmakers or the painters who hope to gain inspiration from the Otherworld. It’s not necessary to decide if we talk of inner demons, the unconscious or some real paranormal influence at work,  creative people need this exchange as a source of strength. The interesting question is how much is their work influenced or even invested by the works of the Otherworld.  It’s always an individual journey and terribly hard, if not impossible to differentiate between personal projections and material which stem from some other source. Furthermore, there are temptations along the way, and there is deception.

Demons appear sometimes to be like a computer-virus, which is lurking somewhere in the web watching out for a weak spot; tiredness, emotional stress, fear and anger, ambitions and negative excitements like alcohol can help them to open the door. Similarly like malware infecting software they work like a thought, a living agency on its own. A simple but very strong thought, which spreads everywhere. Paranoia might be a good example. It can be a little moment triggering a certain thought and then it becomes hell, it can begin with a misunderstanding in a conversation, a little disappointment, a reaction misunderstood. But remember – like David Lynch’s “Mystery Man” the demons never come uninvited.

Hopefully the artist doesn’t fell victim to the tricksters from the other side (or from deep inside) and becomes possessed (even some form of possession seems necessary). It’s the complete loss of control, the human made a puppet by otherworldly forces when the game is lost. Having some confidence in the power of imagination might be helpful to avoid possession. A person rich with imagination might be able to better deal with (his own) and other demons. Sometimes a movie or a book shows how the artist dealt with the demons, and we can learn something about the great cosmic drama in which we play our little parts.

Writing or being creative indeed is a good way to deal with the demons. Like Clarice Starling the writer or film-maker has to offer something and it’s no wonder that they greedily taking his energy and the writer is tired and exhausted in the end, but in the best of all cases it can be “quid pro quo” and the artist received some deeper understanding of all things, something which he can communicate.