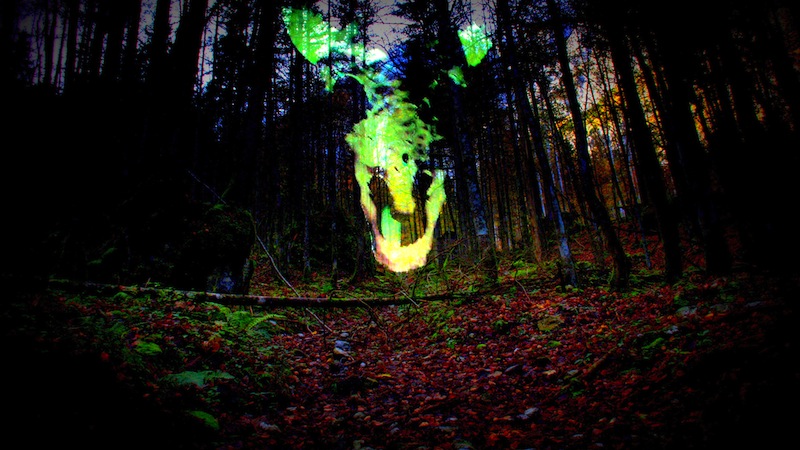 “If you go down to the woods today, You’re sure of a big surprise. If you go down to the woods today, You’d better go in disguise’, if you go down…” No, this is not a song about cute teddy bears. It’s about those beings, which are there at certain times. The woods have been terra incognita for thousands of years, and many of the mythical inhabitants seem to be alive at least in the collective consciousness; weird animals, big-foot and, of course, aliens. However sometimes the sightings sound more like a strange and weird encounter rather than a scary one, which makes you think you wouldn’t wonder if somebody would even report teddybears in the middle of the woods.

One of the modern haunted forests of our days seems to be Rendlesam Forest in the UK. It became famous for its UFO-Sighting on 26. December 1980 which involved a security patrol of the nearby NATO-Base Woodsbridge. The servicemen reported a strange glowing object with coloured lights. “The animals on a nearby farm went into a frenzy” according to a memo by the deputy base commander Lt Col Charles I. Hall, who investigated the case. One of the servicemen, Sgt. Jim Penniston, while undergoing regression hypnosis in 1994, subsequently claimed that the “craft” he encountered had come from our future, and was occupied by time travellers, not extraterrestrials (source: Wikipedia). Later on, Hall and the servicemen returned to the site and found burn marks, broken trees and three impressions or depressions in a triangular pattern. During the investigation a flashing light was reported (which could stem by a light-house some miles away) and starlights. The brightest of them “seemed to beam down a stream of light from time to time”.

The Rendlesham Forest events became one of the key-events in contemporary UFO-mythology and triggered conspiracy theories as reactions similar to religious wonders (believers return to the place regularly like pilgrims to a sanctuary).

The story of the servicemen sounds a bit too stereotypical, a bit too much cliche. However considering the number of people involved as witnesses it’s very unlikely that it was a hoax by some good-old-boys-company. Something must have happened there. There was something in the woods, which didn’t make sense (or somebody was indeed there). Even if the investigation may have found explanations for some of the events there is an element here which isn’t easily understood – not so much the physical traces but the deep impression the event posed upon the servicemen.

Maybe, if we go down into the woods alone we experience sometimes hallucinations like in sensory deprivation experiments but here it was a group which reported the event. The point  about the Ufo and the time-travellers is that the reports sound more like an interpretation of the event rather then a description of what really happened. It’a s bit what you would already expect what will happen if somebody tells you about a strange light in the sky. It’s predictable. The reports bear also strong similarities with the encounters with fairies and demons in medieval times. The strong similarity of Ufo-sightings with fairy encounters was described by Jacques Vallees who compared it with the “secret commonwealth”.

Even there are no real primal forests left the woods are still the place which can keep a secret. It looks like we share this planet with some sort of intelligent beings we don’t know a lot about. In our technical world we only accept what can be proved in a scientific way, but in certain places in the woods there must be a backdoor and there, from time to time, they slip back into our minds. We can’t see what we don’t understand (or we only want to see what makes some sense too us) but as the log lady in Twin Peaks said “the owls are not what they seem”. If we could see what they really are it might be too frightening to us, we may loose our wits as we know from certain fairy encounters.  It reminds us of Greek philosopher Proclus who said:

“In all initiations and Mysteries, the gods exhibit many forms of themselves, and sometimes indeed an unfigured Light of themselves is held forth to the view; sometimes this Light is figured according to human form, and sometimes it proceeds into a different shape. Some of the figures are not gods and excite alarm”.

So, be sure of a really big surprise if you go down into the woods at certain times…